What is Aff The Streets?

Aff the Streets is the National Youth Steering Group as part of the A Way Home Scotland coalition.

It was created when it was recognised that there was not enough representation of young people on the coalition and that it was essential that young voices were heard across sectors. Members of Aff the Streets have different housing experiences, with some of our young people with lived experience of homelessness, some who are recognised as highly at risk of becoming homeless and some who just have a genuine interest in helping to end youth homelessness. Some of our members also represent young people who are care experienced and from the LGBT+ community, some of the groups that are over represented within the homeless population. Our group meets regularly, we are represented on the coalition group and we have a seat at the Scottish Government’s HPSG, which means we can take young people’s views directly to decision makers and ensure they are part of future policies and legislation!

Aff the Streets wants to ensure that organisations and local authorities are receiving adequate support to involve young people in the planning of their services using a co-design approach.

We represent young people on the A Way Home Coalition and at the Scottish Government, and we want to encourage more young people to get involved with their local youth groups or volunteer with us to ensure that our voices are listened to, taken into account and translated into plans and policies.

What Needs To Be Done

Our voices need to be heard, the more the better!

We always welcome new members to join our group so if you want to know more about the work that we do and how you can be involved get in touch at affthestreets@rocktrust.org

Read Shea’s blog to understand more about Aff the Streets!

We contributed to the development of the first Youth Homelessness Prevention Pathway for care leavers, which is a guidance for anyone involved in the lives of care leavers on how to prevent them from becoming homeless and provide the best support available.

The language of the document is not always youth-friendly, so we created a very short document that explains what each recommendation means.

Check it out here 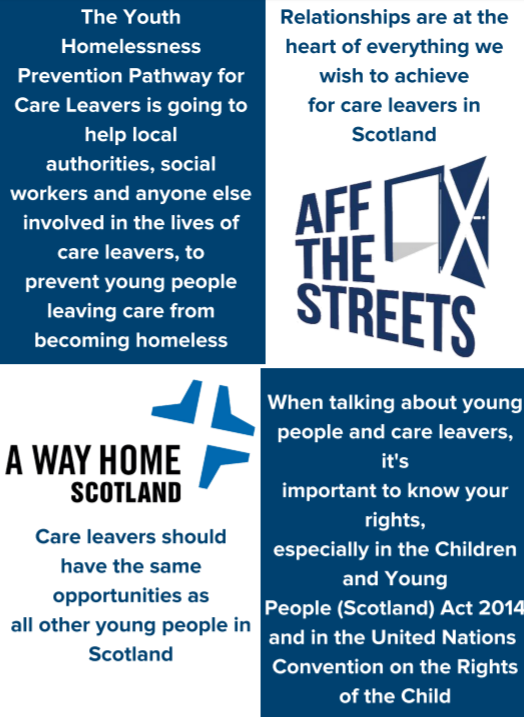